Editor’s note: You know their names and titles … but do you know what makes them tick? Check this space often during the Fall 2019 semester to learn more about Park University’s executive team. 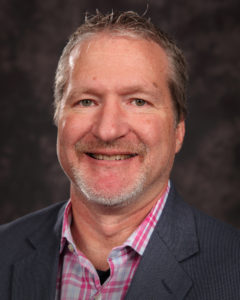 In the following Q & A with the Office of University Engagement, Dave discusses the brain’s response to higher education, his grandfather’s influence on keeping an open mind, crash courses in stick shift driving and the panic that ensues with large-scale thrift store donations.

University Engagement: What is your higher ed story? What kind of student were you? How has education transformed your life?

Dave Whittaker: I was a terrible student in high school; I was just never very interested in studying. I preferred to hang out with my friends and spend time at debate tournaments, reading books or programming on my old TRS-80 Color Computer. In 1986, once all of my friends left home to study out-of-state, I enrolled in community college. I enjoyed history and signed up to take Western civilization with John Stockmeyer, an amazing instructor who took a real interest in his students. He let me know that I could actually do this whole academic thing pretty well, so I finally took to studying and began to succeed in college.

UE: How did your college experience impact you as a leader?
DW: As my staff will tell you, I am a huge proponent of continuing education. I ask my team to finish their undergraduate degrees if they haven’t yet and encourage them to get their graduate degrees, too. I believe if you are taking classes, you are a better employee; more engaged and intellectually sharper. There is just something about how the brain responds to the discipline of education that makes you better at everything you do.

UE: What is your favorite part of being a leader at Park?
DW: I am blessed to have an excellent team in Information Technology Services. The absolute best part about being a member of the executive team at Park University is sitting on stage and watching each student graduate, clapping for each and every one, and knowing that in some way, we impacted their experience and helped them become successful!

UE: What are you reading?
DW: I am constantly reading something. My family always gives me books from my wish list, and I have two full bookcases in my queue next to my bed. I love 1930s pulp horror and science fiction, so I often re-read H.P. Lovecraft, Robert E. Howard and Clark Ashton Smith. [Park University Chief Human Resources Officer] Roger Dusing is great at providing the executive team with good leadership books to help us think differently and improve personally and professionally, so I usually have a Patrick Lencioni book open, as well. I can only imagine the panic that will ensue at the thrift store someday when my kids back up a moving truck full of hundred-year-old books.

UE: Describe your first car.
DW: My first car was a 1981 blue Chevy Chevette that I bought in 1985 for $500. At the time, I was a delivery driver for Godfather’s Pizza at Northeast 72nd Street and North Oak Trafficway in Gladstone, Mo., and had to learn to drive a manual transmission just a few hours before my shift started. For those of you behind me on the hill on 72nd Street in 1985, I apologize…

UE: What is the best piece of advice you’ve ever received and how did you apply it? Similarly, if you could advise your 21-year-old self, what would you say?

DW: I remember talking with my grandfather when I was around 20 years old. I commented on a social topic, to which he replied, “Boy, you have to learn to keep an open mind.” Granddad was a Marine in WWII who served in the Pacific and the occupation of Nagasaki right after the war ended, and he was a mathematical genius. I admired him more than anyone on the planet. I took his words to heart and have tried to understand other people’s perspectives and be respectful of those whom I don’t always understand. If I could talk to 21-year-old me, I would simply say, “Be nice to people and keep an open mind. You aren’t smarter than anyone else.” I still have a long way to go, but I’m better at this now than I was before!